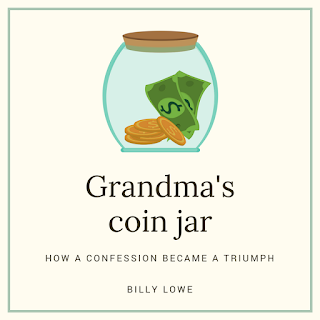 I have a sweet tooth.  There I said it.

I don't care how much sugar, how much fat, or how much anything it has in it - if it looks good and I want to try it, I'm going to.

My Grandmother was my favorite person on earth.  She believed in my mind and encouraged everything I ever wanted to do.  When she passed away in 1999, a part of my childhood did as well and I  knew I had to somehow keep the magic and Hope of life alive within myself to keep her vision and "push" going.  My Aunt Vivian once said Grandma could pray the paint off of a wall and that when she passed away, Aunt Vivian looked up and thought to herself "Lord who's gonna pray for me now?"  Grandma prayed for everyone, their pets, and their fleas.  She was the kindest, most gentle and loving person, and she wouldn't think twice about friends just popping in for a visit and she'd have a meal prepared in 5 minutes that looked like it had taken an hour.   "Y'all come on in."  she would say.  "I was just about to put some potatoes on so you may as well stick around and enjoy them."  Before they actually arrived Grandma was probably folding laundry in the back somewhere and potatoes were the last thing on her mind.

She didn't have a lot of money but throughout the  year she separated her silver coins and her pennies (usually grocery store change).
She had little jars and dishes here and there with coins being collected throughout the year so she would have enough money at Christmas to buy gifts for her children and Grandchildren.  As a little boy, I loved nothing more than days after school, summer vacation or holidays being spent with my Grandmother, my guardian angel, my light.

Across the street from Grandma was a little convenience store called Moore's which belonged to a local family before them named "The Lyles."  The Grandchildren often went across the street for a soda or peanuts after school and we may as well have been going to Santa Barbara or taking a cruise. Penny bubble gum, 5 cent chocolates, sodas and microwaveable sweet rolls were just the beginning of the options.

One summer day, probably after my 2nd grade, I went into one of Grandma's dresser drawers where she had an old coin sorter that belonged
to her mother.  I was preparing to steal from the person I loved the  most and the conviction hit me before I could even put my hands on her jar.  I felt the shame, the regret, and the pain of taking money from my beloved Grandmother and friend.  But quicker than a minute "that old devil" will have you doing one bad deed after another before you can even blink.

A few years later, my 6th grade year in fact, I got to thinking about and missing my Grandma.  And I knew I loved her, I always had.  But in my mind I kept reflecting on stealing change from her coin tray.  I didn't have any money at all as a kid but there was some loose change on my dresser.  Now this was an act of confession so I certainly wasn't going to ask my mom or dad to mail an envelope of rattling change so I had to be careful here.  I taped a dime to a card and I wrote "Dear Grandma.  I don't remember how much I took, but I took money from your coin dish and I wanted to send this dime to you and apologize."  I'm dating myself here but this was before cell phones, computers and texting.  And let me just say - from the 2nd grade to the 6th, that's a lot of time to carry guilt around unnecessarily.

A few weeks went by and there was a letter from Grandma.  I knew her envelopes and I knew her handwriting and could see it from across the room.  What happened next was something I had least expected and something that changed how I view confessions and admissions.

As I opened the letter, there was a crisp $10 bill enclosed.   I think the letter began with the word "Honey."  She went on to say that I had done the right thing by exposing my dishonesty and making my wrongs right and she wanted me to know and to experience what a confession of honesty felt like. It was a celebration, not a shameful thing. She explained that it took strength and courage to face my wrong doings to her and to myself.

Over the years and in many personal and professional relationships, I've worked to be transparent. Sometimes this is to a fault, but if I have questions I ask them.  If I have doubts I position them front and center. If I've had a learning experience I share it. If I have a weakness I address it and I find a solution.  Not to correct or "enforce" but to give to others and to myself something that was given to me or someone else.

I'm sure Grandma included a Bible verse of some kind but I called my dad and bragged on his mother about this story and he pointed me to the book of James, Chapter 5 verse 16 which reads:

James 5:16   Therefore, confess your sins to one another and pray for one another, that you may be healed. The prayer of a righteous person has great power as it is working.

I'm thankful for my family, and for the joys through the years.  Are there situations we all wish may have been a little different?  Possibly.  But this is one VALUABLE lesson that helped me realize the pain of keeping secrets, and that by sharing them, I didn't have to carry them alone and perhaps, just perhaps, someone else understood.