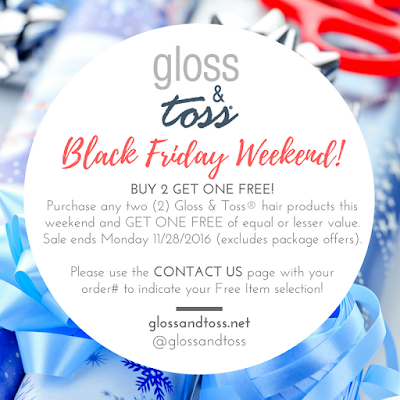 THIS YEAR - I'm really excited to announce that Gloss & Toss haircare is participating in Black Friday and Cyber Monday Savings.

BUY ANY TWO (2) ITEMS AND GET ONE (1) FREE OF EQUAL OR LESSER VALUE (DOES NOT INCLUDE GIFT SETS OR VALUE SETS).

Here's how to order:

We love the savings this time of year and Gloss & Toss is excited to participate with thousands of other brands worldwide offering a great savings on amazing holiday gift guide items. 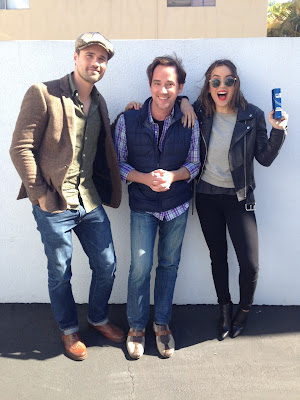 Gloss & Toss Hair Serum shined on set with the cast of Agents of Shield for their press tour. Actors Chloe Bennett and Brett Dalton sat down with radio stations everywhere to answer questions from DJ's and fans who love the show.  I, of course, was excited to be there and get to meet these two awesome (and talented) actors.

I think many of us can agree that Agents of SHIELD is not only exciting, it has the most amazing cast members. But have you seen the sets? I occasionally hop on and off a set booking just to see what's going on out there and it's amazing to be a part of this Hollywood world.

So what's in a press tour for Agents of SHIELD or any television show and how does hair and makeup fit in and how did Gloss & Toss hair products get to be so lucky? Well truthfully, it comes with doing your time, volunteering a lot when you start out, and raising your hands for the work that many people don't want to do.

Many times press junkets or media interviews consist of a host or moderator asking questions and directing the interviews, and sometimes they include taking caller questions or twitter feeds while the interview is live. The cast of the show will answer questions whether from a live caller, a Twitter question, or perhaps one they've save to answer themselves.

The day began for us at about 5am when we (hair and makeup) showed up at the studios in Santa Monica, CA and I must say it was a chilly morning.  However, they had coffee on right away which always cheers this Georgia boy up.  Little by little "cast and crew" show up, get set up in dressing rooms or hair and makeup stations, catering delivers light bites throughout the day to all, and I must say it's a true "highlight" for me to get to do what I do.

Mr. Brett Dalton is truly a class act.  He wore his hat that day (which I love because I wear the same kind).  Chloe - you just can't top her energy and charisma even during long sessions.

At the end of the day I gave Chloe a Gloss & Toss hair serum and asked for a photo and they both said heck yes - and Chloe said "We have to get Gloss & Toss in there."    So they took this amazing shot with me.   Yes, Gloss & Toss has superpowers - and I was so delighted (can't you tell) to get to spend the day with these two.    YES I STILL GET A LITTLE STAR-STRUCK.

Fluorescent Hair is not as easy as it looks but lots of people are talking about it for holiday parties and gatherings.   Occasionally the Hallmark Home and Family Show invites me for a fun and exciting segment and this one was a little challenging but we got through it.

In a traditional set-up, I'd highlight certain areas then tone those specific areas with a glow-in-the-dark toner then rinse out.  This one I did on dry hair for time sake then removed with spray and a soft cloth.  Not  ideal - but we weren't equipped with a full salon set up.   However we got through it and the results were super fun.

To protect this look we recommend the following key items from Gloss & Toss.

GLOSS & TOSS PREP to help hydrate and nourish the color application. A lightweight detangler and moisture spray to smooth hair and protect from thermal and environmental damage.

GLOSS & TOSS SHINE to smooth and protect hair from thermal styling, speed up blow-dry time, fight frizz, and give hair a lustrous look and feel.

Both of these are available at www.glossandtoss.net in our SMOOTHING DUO SET for smoothing your hair. 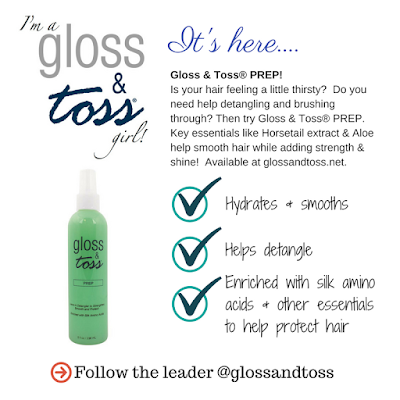 Wintertime hair tips and how to protect your hair in winter weather.  Gorgeous hair is possible all year round and I was able to sit down with Inspirations and Celebrations to share a few great hair tips for winter and ways to keep your hair looking healthy, shiny and strong all year round.

As the seasons change, so does our wardrobe, our skincare needs, our housing temperature, and of course the needs of our hair care products from day to day.  Fortunately there are amazing beauty experts out there that keep us informed of what's new and what's next.

Please check out how to take care of your hair in winter by the amazing blog writer Christina-Lauren Pollack.    Inspirations and Celebrations is a great site featuring lots of beauty and lifestyle articles and we're excited that Gloss & Toss was part of this segment on how to care for your hair during the winter.

Check out her article here on how to "winterize" your hair in the link above.