Blonde hair can often look dull, dark, and drab.   So here are some great tips on how to keep blonde looking bright, and to get more life out of your highlights or blonde hair color.

1.  An oily scalp can cause blonde hair to look dull or dark.  Often times people go 3-4 days without shampooing hair and then complain that their re-growth is growing in too quickly or that their hair line looks/feels darker than it should.  Oily hair tends to lay flat on the head which also makes hair look darker.

2.  When light passes through hair it helps create a brighter/lighter look.  So volume and space in the hair can help create a lighter look to the scalp/regrowth area.   In tip #1 above, I shared that oily hair lays flatter and has less volume and doesn't allow light to pass through.   So use volumizing serums to "pump it up" and this will help hair look brighter/lighter.  Use hot rollers or set hair in barrel curls to add volume and lift in order that more light (space) can pass through the hair to minimize dull/dark root areas.

3.  Freshly blown out hair looks brighter.  Hair that is clean and has been freshly blown out has more shine.  Shine creates brightness and will give the illusion of a lighter look.   Remember to use Gloss & Toss for shiny hair.

4.  Scatter the part.   Rather than parting hair in a straight line - scatter the part so that color shifts throughout.  This distracts the eye and helps create a less dark looking root area.

5.  Timely touch-ups.  Be sure you're on time with your salon appointments so keep hair looking and feeling its very best.

Hope you enjoy these tips, as shared in my hair salon in Westlake Village today with a client.
- March 28, 2015 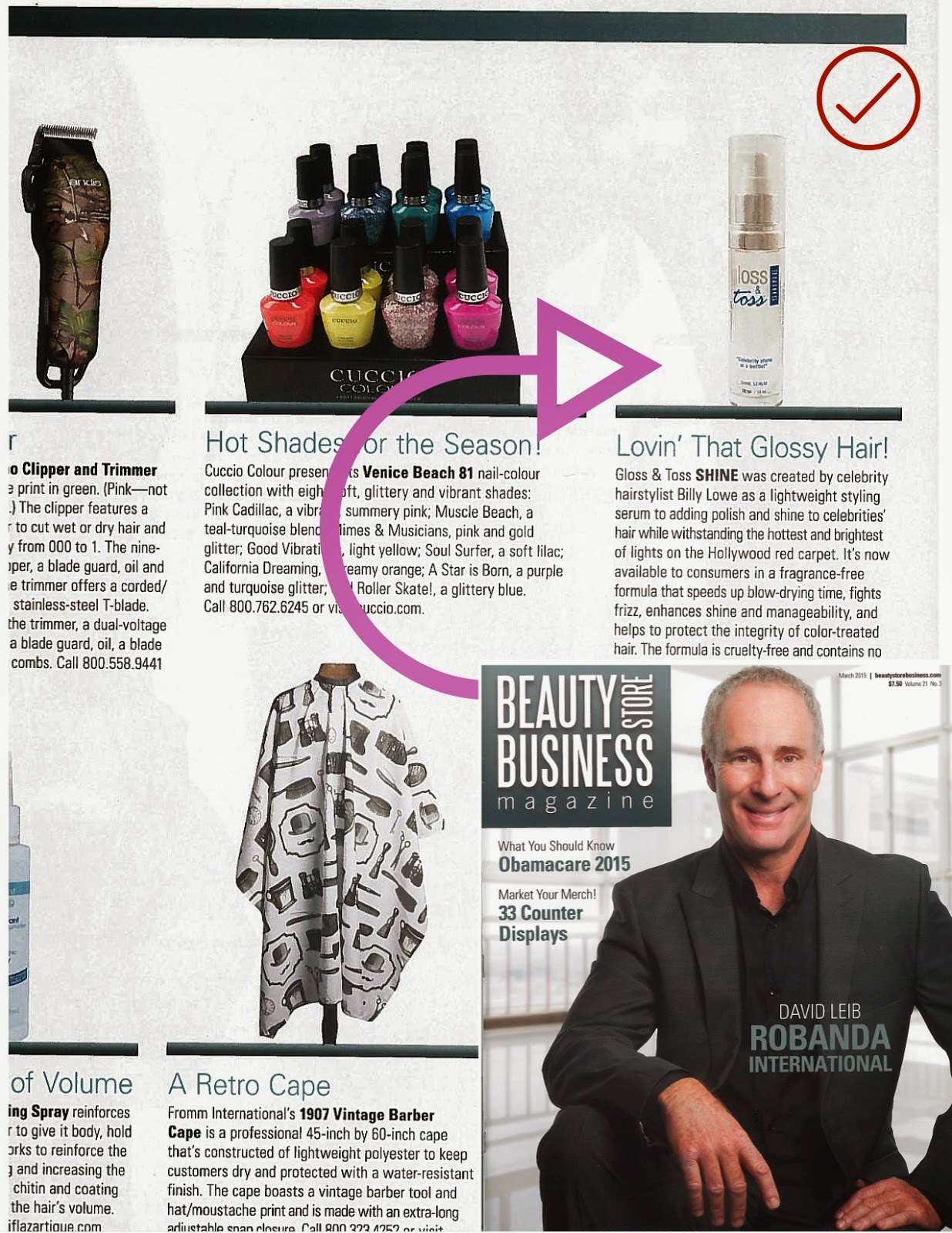 We are pleased to announce that Gloss & Toss hair shine serum was featured in the March issue of Beauty Store Business Magazine.  Time and time again, salon professionals everywhere have hailed this signature product as the best hair serum on the market.  We'd certainly like to think so!

Fortified with jojoba, white birch, licorice root and chamomile, Gloss & Toss SHINE is truly a great serum for blow-drying hair, protecting against thermal styling, adding gorgeous polish and shine and so much more.

Working at the supermarket 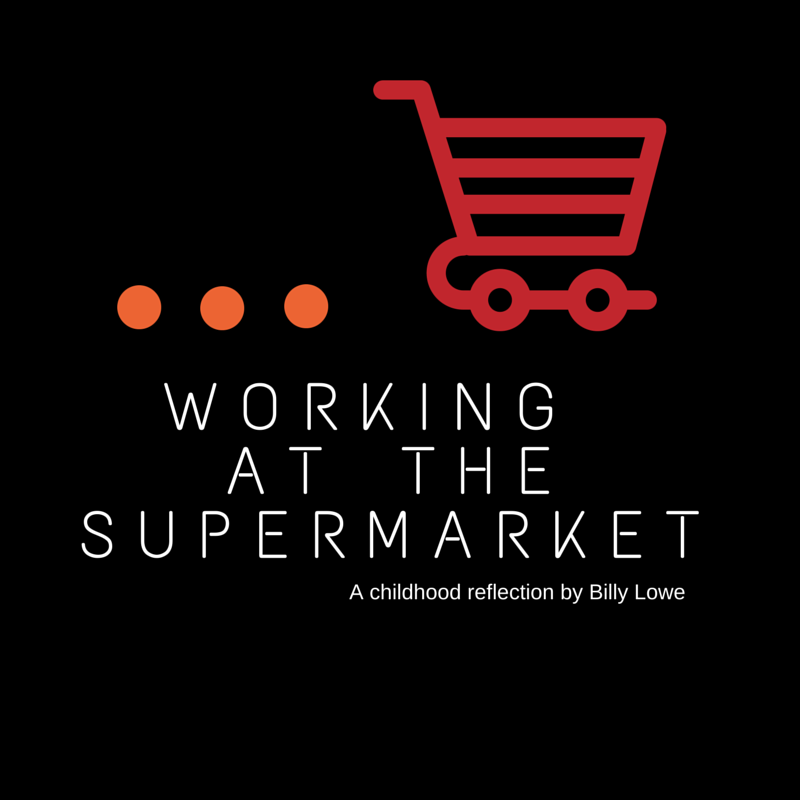 I occasionally have a funny flashback and this one I remembered well.   I don't know about you but I think bagging groceries is a dying art!

It used to be such a craft and people were really specific about how they wanted their groceries bagged; I personally still am.  I'm the one that has to carry the bags to the car, hope they get there without incident, drive home, and then unload them.  I like my groceries bagged a certain way!  I don't want 10 yogurts thrown into a bag with a carton of milk over on its side. Nor do I want my bread on the side of the bag getting bent by the corner of a box of cereal.  Some of these supermarket associates don't even look at they are just throwing things into a bag, leaving me to cringe the entire time.

I remember in high school the kids all wanted to work at the local supermarket and it was sort of a right of passage.  Not that working at a supermarket was so special, but it was truly THE THING to do back home.  At least it was in the 70's and 80's.  "Back in the day" the bag boys and bag girls (as they were then called) could make amazing gratuities bagging groceries and taking them out to peoples' cars.  I mean kids in high school nearly fought to get these jobs.  Cashiers made a little more money so they weren't so concerned with tips but I remember kids saying they made $50, $60, $70 or more in tips every week just bagging groceries and running them to the customers' cars in addition to their hourly wages.  And if it were raining, you'd get even MORE tips.

The right of passage statement was because the kids that DID work at the supermarket also had cars.  They were the IT crowd.  So the whole idea in high school was to get a job bagging groceries, save your money for the year and come back after summer break with cool wheels.  The grocery store workers were the "cool kids on the block."  They had the job, they had the coin, they had the car, and they had the babes (him or her).  They were usually the kids that smoked, usually the kids hanging out at break by the high school soda machine, or out in the parking lot leaning against their freshly polished chrome.

Though I live in Los Angeles today, I often wonder if the supermarket experience for high school kids is the same anywhere today as what it was nearly 30 years ago for me.  Do the kids still make tips for running groceries?  Is it still a "cool thing" in high school to get jobs that pay gratuities to buy a car for themselves?  We didn't have social media, internet or cel phones so the only way for us to engage was with one another and we did this by buying cars and driving around the town square over and over on a Friday night.

But back to the groceries.   I'm truly incredulous that the bagging clerks just don't have what we seemed to have "way back when."  Just something I found myself pondering on today as a friend and I were having teenage memory discussions. 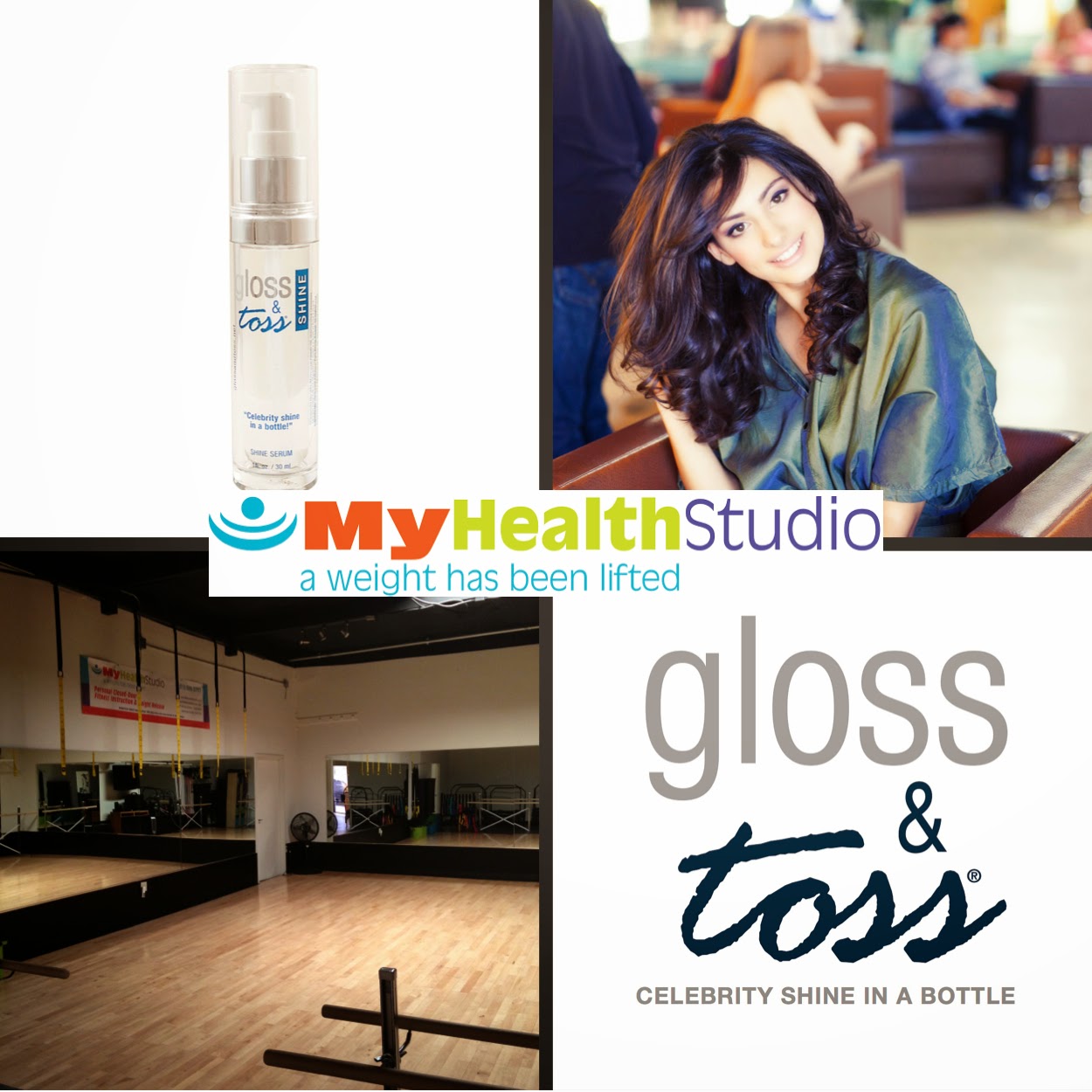 We're delighted to announce that My Health Studio Westlake Village is now a retail partner for Gloss & Toss.

Not only does My Health Studio offer the most amazing in health and fitness in Westlake Village, they also offer a variety of products, services, classes, massage therapy and so much more all under one roof.     AND - they now carry Gloss & Toss for your hair.

They also offer $38 for a month of unlimited classes (I think a 1 year commitment is required) but what a deal.

Visit them online at myhealthstudio.com and be sure to ask for GLOSS & TOSS when you're there.